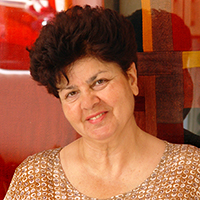 Professor of Politics and Political Communication

School of Journalism and Mass Communication

Dr Sophia Kaitatzi-Whitlock has researched and published extensively on political culture and the media, on European audiovisual policy-making, political communication, reporting crises and conflicts, global and EU cultural policies and on the political economy of the media, nationally, regionally and globally.

Professor Sophia Kaitatzi-Whitlock participated in several pan-European and global collaborative research projects for instance: a. ‘COST-A20: ‘On the Impact of the Internet on Mass Media in Europe’ in which she was the vice-chair of the programme, and b. ‘The Global Environmental Journalism Initiative’, a five year long Erasmus Mundus project.

–              Her latest book: Communication: Theory in Practice,  (2012 in Greek) deals with the way the major communication theories of the 20th century have been put to practice in both professional and everyday life.

–              She published the discussed book: Europe’s Political Communication Deficit (in English, 2005). In this she assesses the damaging gaps / omissions between the novel continentally organised ‘supra-state’, the EU, and the corresponding deficit in pan-European political communication for the benefit of EU citizens and for a civic osmosis and development.

–              Her book: The Domain of Information (2003, in Greek) initiates readers on computation theory and the ‘biography of the digital computer’ and subsequently elaborates on key digital network practices, such as interactivity and transactivity, but also on key aspects and implications of the Information Society, as it is commericalized and haphazardly ‘organized’ .

Recent Chapters in Collective Books or Articles in Journals:

[5]          (2016), ‘Communicating Immigration, Communicating Racism and Immigration Policy’ in The role of the Media and of Journalists in the Rise of Neonazism, Fascism and Racism in Greece, Europe and the World, (in Greek), The Cultural Institute of the Journalists’ Association of Athens (ESIEA), (eds),  Athens

Professor Kaitatzi-Whitlock’s research interests comprise: [a] the political economy of public communication, [b] the nexus of democracy and political communication, [c] the challenges of interactive new media for cultural diversity and for social and political (re-)organization and the potential they bring, [d] public policies, national and transnational, addressing issues of novel communication risks, frameworks and new media phenomena such as the unaccountable ‘Powers of Search Engines’ or the ‘Phenomenon of Infoflation’ (the inflation of information), entailing massive superfluous and/or superficial information exchanges, over internet platforms (e.g. social media. ‘Iinfoflation’ impacts both on journalism and on essential human communication and development. Besides, a relevant new research concern is that of how a revamped ‘new journalism’ might contribute to indispensable public awareness and policy shifts towards peaceful coexistence.

Professor Sophia Kaitatzi Whitlock has been teaching communication theory, strategic and political communication and communication policy courses throughout her academic career. Over the last years she has launched the teaching of new modules (both in under- and postgraduate programmes) aiming to tackle proactively the new communication challenges and to grapple with new phenomena such as: rising insecurities and risks, climate change, refugee crises, questions of global governance and of methods to keep serving the common interest, respecting global public goods and maintaining peace, through reciprocally beneficial communication practices. These human concerns are linked with the challenges posed to the survival of the very profession of journalism in the digital interactive era. Such issues are raised and focused in new modules: a. ‘Investigative Journalism’ and b. ‘Risk Communication’.

Sophia Kaitatzi – Whitlock is currently serving as the vice-chair of the State Museum of Contemporary Art of Thessaloniki.

She is married to Richard Whitlock a sculptor – artist of English origin living in Greece. They have a daughter, Ekavi Whitlock, a theatre and narrative studies scholar and an art events organizer.