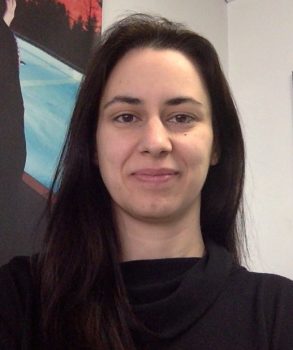 Ioanna studied Mathematics - Statistics, Probability and Operations Research. Βeing a part of Argonauts Productions since 2006, Ioanna is supervising the post-production phase for the Argonauts’ films and since the last two years she produces her own projects. Her filmography includes, among other films, the international co-productions: “Roza of Smyrna”, the recent box-office hit in Greece with more than 350.000 admissions (associate producer & post production supervisor), “Stratos” by Yannis Economides, which had its world premiere in the Competition Programme of the 64th Berlin International Film Festival (assistant producer & post production coordinator) and the omnibus project “Do not forget me Istanbul” (post production supervisor). As Producer, she is currently in post production of the documentary “Behind the wall” about Dimitris Papaioannou’s performance “Still Life”, by Nefeli Sarri, and in development of two feature films: “Behind the Haystacks” by Asimina Proedrou, which participated in the MFI Script Workshop 2016, the Sarajevo Script Station 2015, the Berlinale Script Station 2016 and the First Film First 2016-2017 and has won two awards in Crossroads Co-Production Market 2016, including the CNC development award, and “Peter and the Wolf”(working title) by Thanasis Neofotistos, which had its script developed in TEEP co-production training program 2015 and in MFI Script Workshop 2016. Her first short film, “Prosefhi: Greek School Prayer”, won the 1st prize in Drama Film Festival (Golden Dionysus) and travelled to important international festivals (23rd Raindance, 21st Encounters, 26th SaoPaυlo, etc) and the documentary short film “Pogoniskos” won the best documentary prize at the Drama International Short FF. Ioanna is a Sarajevo Talent 2016 alumna and she has also attended the Maia Workshops 2016 and the EP2C Postproduction Workshop 2014.